"The Guyana Hemp Association, (GHA) believes that sensitizing Guyanese to the importance of producing hemp in the country will create employment opportunities and help eradicate poverty.

The GHA is having an awareness week which commenced yesterday and will conclude on September 17, next.The focus of the week-long programme will be on a number of public forums and video shows to be held countrywide as well as sporting activities, mini exhibitions and media promotions.

The Association which was founded in May has been seeking approval to produce and export industrial hemp, a plant that belongs to the same family as marijuana, to help create a large number of jobs.Head of the Association, Dr. Turhane Doerga, said the group is aiming to bring development to the agriculture sector through the production of hemp.At a public forum held at the Girl Guides Pavilion on Brickdam on Sunday, Doerga noted that Guyanese people are survivors.He expressed the firm belief that the Guyana Rice Industry can be developed more based on the performance over the years.He also noted that sugar can be a success if the management and marketing problems are fixed.The cassava development can be enhanced and packaged in several varieties. He said that farmers need to be educated on the evolving locally and globally.According to Doerga, hemp can be very useful in the production sector.The products are utilized in the creation of biodegradable plastics, such as dashboards from popular automobiles.“Hemp has many uses, including being used as food, in making body oils, fuel, medicine, plastic and paper among others.”Doerga added that during the planting process the drug has to be monitored throughout its growth, to ensure that its potency is within legal limits.In Guyana, industrial hemp is not marijuana because it contains THC (Tetrahydrocannabinol) levels of less than one percent. This prevents any narcotic effect upon anyone who would wish to smoke it, unlike marijuana which contains over three percent THC.

Over 50 countries including the USA, Canada, Kenya, Japan and within the region Countries like Jamaica, Uruguay, Brazil, Venezuela, Trinidad among others have allowed through easing restrictions and legislation, the commercial cultivation of industrial hemp, by declassification of Narcotic Act pertaining to Hemp.The GHA is the first official hemp association in Guyana. The focus of the hemp association is to help build, and facilitate the expansion of Global Hemp industries and communities. The hope is to propel Guyana to the forefront of one of the world’s oldest, fastest growing and most viable industries. "

RT News - Why Industrial Hemp is a Threat to Corporato-cracy.

The GHA has submitted the Industrial Hemp Petition and Handbook to the Parliament of Guyana!!!

RT News - Why Industrial Hemp is a Threat to Corporato-cracy. 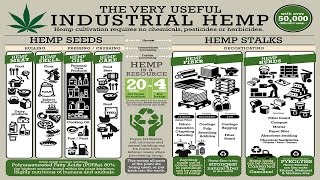 Industrial Hemp Solutions for the World: Excerpt from Documentary: "Bringing It Home"